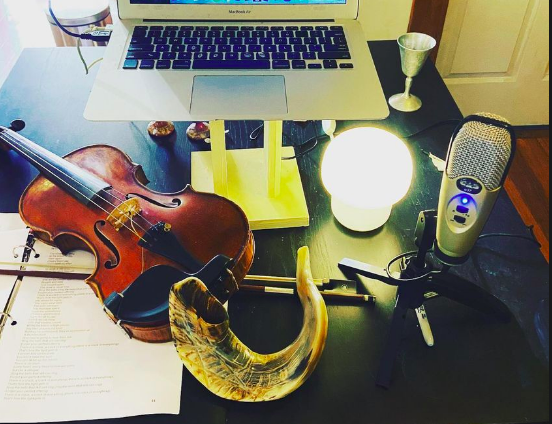 (context: I wrote this as a Yom Kippur teaching/sermon this year; I was assisting a rabbi friend who was leading services for a beautiful little congregation in New York State.)

I saw a tweet this morning that said, “No offense to God, but feels like I’m not the one who needs to atone this year.”

I have a feeling this is not an uncommon though this particular year. Some anger at the Divine does feel warranted. And at the same time, we do need to atone. We hold these contradictory realities, this paradox, throughout Yom Kippur this year – just as we hold the paradox during Zoom services that we are apart, but also together.

In fact, the world is full of opposites and paradoxes. I have come to see this ability to hold opposing realities as a key spiritual practice.  My favorite rabbi, Leonard Cohen, writes about this in his song Anthem:

You can add up the parts
You won’t have the sum
You can strike up the march
There is no drum.
Every heart, every heart to love will come –
but like a refugee.

I think this practice of holding paradox, can help us deepen our practice of teshuva, apology and forgiveness.

One of my favorite examples of Jewish paradox-holding is from Pirkei Avot, the collection of rabbinic wisdom texts, which famously contains this injunction from Rabbi Tarfon:

You are not obligated to complete the work, nor are you free to desist from it.

This applies to teshuva, to social justice work, and to the project of being human – all of which are at the center of this day. There is no way that we can complete the work – the internal work of awakening, the external work of creating a just world. No one can do this in a single lifetime. But everyone is obligated to work towards it.

One personal example: this year, like so many Americans, I have been thinking a lot about racial justice, and the paradoxes of showing up as a white Jewish American. As my eyes become increasingly open to the ways in which I am culpable for my part in a racist society, even some of the ways I try to make amends I later realize are themselves perpetuating oppressive structures. At the same time, I have to learn to hold this truth of my own internalized white supremacy, my own harmful actions, with compassion for myself. If my response to seeing the damage I have caused is to hate myself, that helps no one; I just add more hate to the world. So, a paradox: how to hold this truth of my culpability and try to act in a way that rights those wrongs – while holding radical compassion for myself.

This tension, I think, is central to selichot, the practice of saying we are sorry and asking for forgiveness. To apologize is to say I have done something wrong, to take full ownership for that wrong; but also to step out of fully identifying as the person who would do such a thing; to say, I did this, but I have changed. This is teshuva, the return to one’s deepest, most aligned self. It is paradoxical – to take full responsibility for the wrong we committed, and at the same time, to distinguish ourselves from it. Paradoxical, but real.

Forgiveness, too, contains this paradox. To forgive another is to say – yes, what you did was wrong, and I will not forget or erase that history. It is now part of our story, it exists – but from here, we can move forward together. History is written; the future is not.

And this same tension is also part of forgiving the self. We learn to say: yes, I did this thing, but now I have grown, or returned, or relaxed, or become wiser, or become stronger, or become softer. I cannot undo it, but I can act to repair it, I can investigate why it happened, and try to heal the part of me that made it happen, and if I do that to the best of my flawed human ability, then what other response is there except to say, I forgive you, self, flawed and complicated as you are.

Simply existing is a practice in holding multiple realities. We are made of cells, breathing in this moment, in our bodies; we are also made of minerals and stardust from unthinkably distant celestial bodies, astronomical events that happened so long ago our brains cannot conceive of them.

In the same way, we are individuals with our own stories, our own secrets, our own shame, our own red-hot spiritual work to do. And we are also part of a bigger picture. The Ashamnu prayer, one of the central parts of the Yom Kippur service, is an acrostic, where we go down the Hebrew alphabet reciting a different sin for each letter. Ashamnu, Bagadnu, Gazlnu – the “nu” at the end means they are all in the plural. There is no way we all have committed every sin in the Hebrew alphabet, but we are connected – as humans, as Americans, as Jews, or partners of Jews, in all our intersecting identities, we all bear responsibility for what happens during our watch on earth.

All of this paradox is too much for any one day, any one ritual practice. And yet, here we are, doing it. To hold all of this pain breaks our hearts and minds open. And perhaps that is the point. During the Mussaf Aleinu, as we begin to glimpse the closing of the gates at the end of Yom Kippur, we physically kneel down and lay our bodies on the floor, as if to say, we cannot hold all this – we can only let go.

So hinenu, here we are. Not obligated to complete the work, not free to desist from it. May our hearts be opened, may our spiritual work today transform into action throughout the year to come, and may we allow the paradoxes of being alive to break us open and allow us to go deep into the truth. May we see – with compassion and also with clarity – who we have been; who we are; and who we can become.