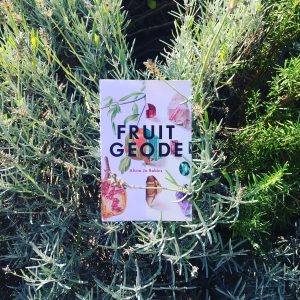 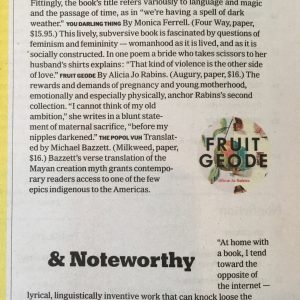 Fruit Geode, my second book of poetry, was published this fall!

On the left, here’s Fruit Geode between the lavender and rosemary in my garden…

and, on the right, amazingly, here’s Fruit Geode in the New & Noteworthy section of the New York Times Book Review!

Because Fruit Geode is a book about pregnancy, birth and early parenthood, it made sense that on much of my fall tour, I was accompanied by my four-year-old son and roadie, Elijah. (Sylvia, now 6, didn’t want to miss school – which is good – so she was home with Aaron. Except when he went on tour with his band – then I was home!)

I could not do what I do without the tremendous help of my friends and family. Thank you so much. You fed us, housed us, came to readings, hung out with Elijah, and generally filled us up with love and hospitality. You know who you are, and I am forever grateful.

This was a special tour for me not only because Elijah came, but because I got to integrate my two great artistic loves, music and poetry. Basically, halfway through writing Fruit Geode, I realized that I wanted to create a live soundtrack to perform along with the book, ambient music on violin through electronic pedals – so I did. I’m working on documentation of the live performance; for now, here’s a glimpse of a work in progress showing:

Elijah is officially now a total road dog. Here are a few shots: in the Portland airport, at JFK, and in the rental car with a candy cane from a rest stop, which got us through a long drive.

Some sweet moments in Western Massachusetts, where I used to live. We had “sleepovers” at friends’ houses, and made art and hiked with them; I read at a lovely new coffee shop; and I visited with a student group at Hampshire and a feminist Judaism class at Mt. Holyoke (during which Elijah colored in Batman while wearing Batman PJ’s!)

Below, performing in NYC; raising a glass with three dear fellow-poets after a group reading at the Poetry Barn in the woods of Exeter, NH, and the next day, and watching pre-Shabbat cartoons in Boston;

Because of the way the schedule worked out, I ended up going to NYC three times in five weeks – twice with Elijah, once on my own. Not so good for my carbon footprint, but very good for my heart to see this city I so love. I gave a reading/performance at the Poetry Project, one at the 14th St Y Theater, and had pancakes for brunch with Jascha twice. (Between the two readings, I came to the city alone to perform at a private event hosted at the New York Public Library, which is how I was able to walk around buying the aforementioned shoes at 1 a.m. – no sleeping kids to watch, and I was on west coast time!)

We spent Thanksgiving week with family at my childhood home just outside Baltimore, where we got to hang out with family, helped Grandma make pies, contemplated Grandpa Dick’s self-portrait, and I read at The Ivy Bookshop with amazing poets (and saw dear old friends and teachers).

In between East Coast trips, we spent a couple weeks back home in Portland, where I had the privilege of reading at the Portland Book Festival, in the galleries of the Portland Art Museum, and meet up with beloved writer-friends who came into town to read (here, Vanessa Hua, whose novel River of Stars is wonderful!)

In November, a solo trip to San Francisco during the forest fires. Intense and challenging and frightening to be there during the smoke, and my heart went out to those affected by the fires. I was also grateful to read at one of my favorite bookstores, teach a session at the Contemporary Jewish Museum, and see dear friends.

On one of the plane rides East, I saw my name in the credits for the first time on the seat-back screen! It’s from PBS’ Poetry in America series, for which I composed and recorded the title music.

Meanwhile, other projects continue. Thank you SO MUCH to those of you who donated to A Kaddish for Bernie Madoff: The Film!

We are now actively planning production! In between tours, director Alicia J. Rose and I met with our brilliant script-doctor friend Jonathan Sanford meeting to go over the script, and we are aiming to carry out production in June 2019. If you missed the crowdfunding, you can still give a tax-deductible donation to the film here, at any time.

Meanwhile…poetry has a long release time, so the tour isn’t over! In the coming months I’ll be in England, Oakland, Palo Alto, Portland, Seattle, NYC and South Carolina – details here.

See you on the road,