An International Premiere After Many Months At Home

An International Premiere After Many Months At Home

It’s rainy late November here in Portland OR, and I’m still a little jet-lagged…just back from an incredible two-stop tour in Europe, performing music and screening a film, the sort of grand adventure I’d almost forgotten existed. Lots of KN95 masks, lots of testing and filled-out forms and showing vax cards, and even more joy and art and life and cobblestones and light that looks different from the light at home. I’m very grateful for the magic of it, and still sort of processing it all.

I had a traveling companion on this trip: fellow Alicia-in-Portland, director Alicia J. Rose (in the pink shoes on the PDX airport carpet to the above). Alicia is my collaborator on the currently-in-festival-release Kaddish for Bernie Madoff film, and after many years of solo touring (in large part due to the exigencies of motherhood), it was a real joy to have a partner in crime on the road. We had two stops planned: first London, where I played a solo Girls in Trouble show and Alicia did some filming for the concept trailer of our next project; then Estonia, for A Kaddish for Bernie Madoff‘s international premiere in competition at the Black Nights Film Festival! 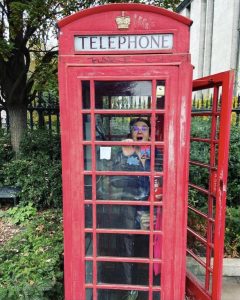 This was not only my first time out of the country in three years – it was also the first full live concert I’ve played since the pandemic began. And lucky me, the performance took place at JW3 in London. To me, this is one of those “second home” venues that, if you’re lucky, you develop as a touring artist. A place where you feel like you’re seeing family when you walk in the door; where you inquire after one another’s families and stay in the booker’s guest room and sit backstage before the show marveling at how much time has passed since you last stood in the spot together. (In my case, seven years.)

I was sad to leave London and my beautiful friends there after only two days, but my two kids were at home, and my husband was on a separate tour!  My incredible parents had flown cross country to spend eight days with S. & E., a first for all of them. I knew it would be great, but also wanted to get back as soon as I could. So after 48 hours in London, we were off to Tallinn.

I had no idea what to expect – to be honest, I’ve had some rough experiences touring in Eastern Europe. But this was the absolute opposite, beyond my wildest dreams. I kept thinking, “I can’t get used to this kind of treatment!” But then I thought maybe that’s not the right approach. Maybe I should instead envision more of this beauty and respect for the arts and attention to detail, and add these things to my rider…

my very own hotel room, with a resplendent Scandinavian-style breakfast included every morning; a hot tub on the hotel’s top floor; a field trip to a bog with vegan pumpkin soup and glog (hot mulled wine) miraculously appearing mid-hike; futuristic wearable air purifiers (which you can see around our necks in the middle picture – we got to borrow them for a TV interview); an international community of independent filmmakers who somehow became our fast friends within hours; and the incredible feeling of seeing our film on the big screen.

Aaaaand….because I don’t believe in sharing only the highlights, here’s the other side of the story. Re-entry into still-solo-parenting after 24 hours of travel was, to be honest, quite a rocky landing. (And re-entry into being with me after 8 days of being spoiled by grandparents was, I’m sure, rocky for my kids as well.) Did it take me a couple days to find my mom-sea-legs? Yes it did. Thankfully we have found our rhythm now and spent the morning doing jigsaw puzzles by the fireplace, and the evening at a food cart pod across town. Art life, family life, so many ups and downs – sometimes it’s glorious and sometimes it’s difficult and it’s a blessing to be here to experience all of it.

If the vaccines hold, the NYC live premiere of A Kaddish for Bernie Madoff will be in Manhattan, two screenings, on January 15 and 17 (MLK weekend) – but I’m not allowed to announce that quite yet. I miss my beloved NYC, though, so my fingers are tightly crossed. Meanwhile, I’m continuing to work on my memoir-in-progress, and poems, and a staged version of Girls in Trouble…

Until then, wishing all the light of Chanukah and miracles to illuminate all our lives.