For the past few years I have been quietly grinding away at the joyful labor of making two very different forms of art – a book and a film. And somehow, mysteriously, through completely different channels, they are both being released on the same day  … today(!)

If you have been following me (or if you scroll back on past posts) you’ll see the very indie, very intense process of writing, filming and carrying out post-production on the film that comes out this week, A Kaddish for Bernie Madoff (which began as a one-person show I premiered in 2012, before being adapted into this pretty wild 75 minute film, made in collaboration with director Alicia J. Rose and producer Lara Cuddy, to my right below  – with our cinematographer, Asia Brown, on the left).

We had an incredible in-person premiere last week at the Hollywood Theatre here in Portland, with such a wonderful and supportive crowd (and yes, some technical issues which drove me bonkers, which is appropriate since in the theme of the film is that nothing and nobody is perfect and if something pretends to be, it’s not real. And improbably, this is real!) 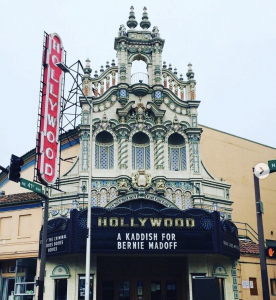 As of September 6, the film is available to rent or purchase on demand across North America thanks to a deal with Freestyle Media! 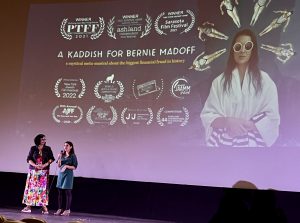 Meanwhile, a very different project is also being born today – Even God Had Bad Parenting Days, my book of short personal essays about early parenthood and Jewish spirituality, published by Behrman House Press. This book grew out of my MOMentary essay series for Kveller. It’s full of fairly personal stories about my own ups and downs as a new mom; the very steep learning curve, tears, snuggles and challenges; and my ongoing gratitude for the wisdom of the ancestors, who were really very reassuringly sanguine about how hard it is to be a parent.

And I got to be on the news this morning talking a bit about it!! Five minutes has never gone so fast… 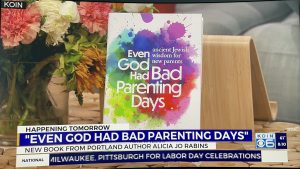 I’m so grateful these two projects are being born into the world. And of course, since I am incapable of sitting still (working on that, sort of) I’m already swimming in the next round. What that looks like: wrestling with line breaks (including some new poems in a feminist folio from Ayin Press) & narrative arcs & typing away on google docs containing nascent screenplays & working on the Girls in Trouble theatrical show & finding the right sound for a new song. And family & friends & cooking & plants & coffee & b’nai mitzvah tutoring & a little touring.… balancing these is messy, imperfect, and always on the edge of too much, just the way I like it. Thank You, Goddess.

Thank you so much to so many of you who have supported me during the long and complicated process of bringing this film and book into the world. So many fantastic people helped me realize these projects, and I’m grateful to each and every one.  If you like the book or film, please do leave a review wherever you like – it really helps!